BIG-IP® acceleration, deployed symmetrically, asymmetrically, or in combination, can significantly improve transaction response times. It includes specific techniques that modify or optimize the way in which TCP and other protocols, applications, and data flows can function across the network. Acceleration features enable you to refine transaction response times, according to your specific needs.

A virtual IP address can be configured on a BIG-IP® Local Traffic Manager™, which then acts as a proxy for that IP address. The BIG-IP Local Traffic Manager directs a client request made to the VIP to a server among a pool of servers, all of which are configured to respond to requests made to that address. A server pool improves the response time by reducing the load on each server and, consequently, the time required to process a request.

All of the resources on your network are associated with a data center. BIG-IP® Global Traffic Manager™ (GTM™) consolidates the paths and metrics data collected from the servers, virtual servers, and links in the data center. GTM uses that data to conduct load balancing and route client requests to the best-performing resource based on different factors.

Despite the ability for multiple transactions to occur within a single TCP connection, a connection is typically between one client and one server. A connection normally closes either when a server reaches a defined transaction limit or when a client has transferred all of the files that are needed from that server. The BIG-IP system, however, operates as a proxy and can pool TCP server-side connections by combining many separate transactions, potentially from multiple users, through fewer TCP connections. The BIG-IP system opens new server-side connections only when necessary, thus reusing existing connections for requests from other users whenever possible.

Caching provides storage of data within close proximity of the user and permits reuse of that data during subsequent requests.

In one form of caching, a BIG-IP® instructs a client browser to cache an object, marked as static, for a specified period. During this period, the browser reads the object from cache when building a web page until the content expires, whereupon the client reloads the content. This form of caching enables the browser to use its own cache instead of expending time and bandwidth by accessing data from a central site.

In a second form of caching, a BIG-IP in a data center manages requests for web application content from origin web servers. Operating asymmetrically, the BIG-IP caches objects from origin web servers and delivers them directly to clients. The BIG-IP module handles both static content and dynamic content, by processing HTTP responses, including objects referenced in the response, and then sending the included objects as a single object to the browser. This form of caching reduces server TCP and application processing, improves web page loading time, and reduces the need to regularly expand the number of web servers required to service an application.

In a third form of caching, a BIG-IP at a remote site, operating symmetrically, caches and serves content to users. The BIG-IP serves content locally whenever possible, thus reducing the response time and use of the network.

HTTP protocol optimization achieves a high user performance level by optimally modifying each HTTP session. Some web applications, for example, cannot return an HTTP 304 status code (Not Modified) in response to a client request, consequently returning an object. Because the BIG-IP® proxies connections and caches content, when a requested object is unchanged, the BIG-IP returns an HTTP 304 response instead of returning the unchanged object, thus enabling the browser to load the content from its own cache even when a web application hard codes a request to resend the object.

The BIG-IP improves the performance of Web applications by modifying server responses, which includes marking an object as cacheable with a realistic expiration date. This optimization is especially beneficial when using off-the-shelf or custom applications that impede or prevent changes to code.

You can easily monitor your HTTP traffic and system processes by using various monitoring tools. You can use BIG-IP® application acceleration performance reports, the BIG-IP Dashboard, and other related statistics or logging, as necessary to acquire the information that you want.

A geographically distributed deployment consists of two or more BIG-IP devices installed on each end of a WAN: one in the same location as the origin web servers that are running the applications to which the BIG-IP is accelerating client access, and the other near the clients initiating the requests.

Deploying multiple BIG-IP devices achieves additional flexibility in controlling where processing takes place. To prevent sending assembled documents over the WAN, all assembly, except PDF and image optimization, occurs on the device that resides closest to the initiated request. 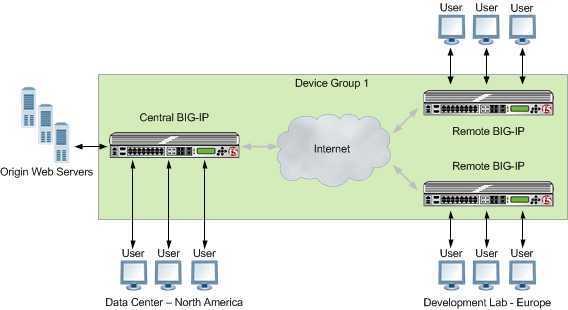 For each HTTP request that the BIG-IP system receives, the system performs one of the following actions.

Management of responses to clients

The first time that a BIG-IP® system receives new content from the origin web server in response to an HTTP request, it completes the following actions, before returning the requested object (response) to the client.

Flow of requests and responses

The BIG-IP® system processes application requests and responses in a general sequential pattern. 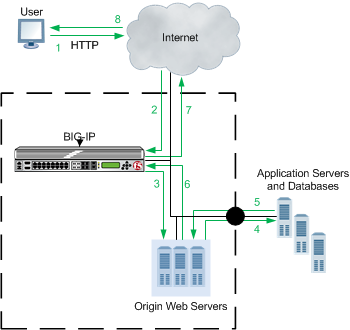 Each step is processed in the following sequence.