Configuring a BIG-IP System with iSession in Routed Mode

A routed deployment is one method of deploying a BIG-IP® system directly in the path of traffic, such as between a WAN router and LAN switch. In routed mode, the BIG-IP system is nontransparent on the network, with separate LAN and WAN self IP addresses on each side. This setup ensures that requests from clients go to the BIG-IP system, which optimizes the traffic before it reaches the server.

Illustration of a routed deployment

This illustration shows a pair of BIG-IP® systems in a routed deployment (Site B) on one side of the WAN, and a one-arm deployment on the other side. 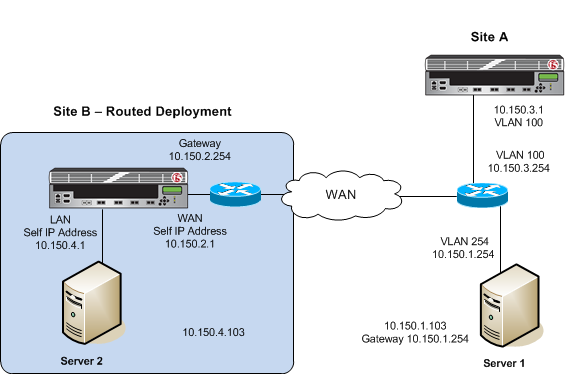 Example of a routed deployment

Before you begin configuring an iSession connection

Before you configure an iSession™ connection on the BIG-IP® system, make sure that you have completed the following general prerequisites.

If you are configuring a BIG-IP® system in routed mode, you configure separate self IP addresses for the internal and external interfaces. Also, you need to create a passthrough virtual server that you can use to verify the connection before you try to optimize traffic.

Note: Make sure that you associate the LAN and WAN VLANs with the appropriate interfaces (ports).

Create VLANs for the internal and external interfaces on the BIG-IP® system.

Creating self IP addresses for internal and external VLANs

You must define a route on the local BIG-IP® system for sending traffic to its destination. In the example shown, the route defined uses the default gateway to send traffic to the router.

Important: Use this task as a checkpoint before proceeding with iSession™setup.
You can verify connectivity from the command-line interface.

Setting up an iSession connection using the Quick Start screen 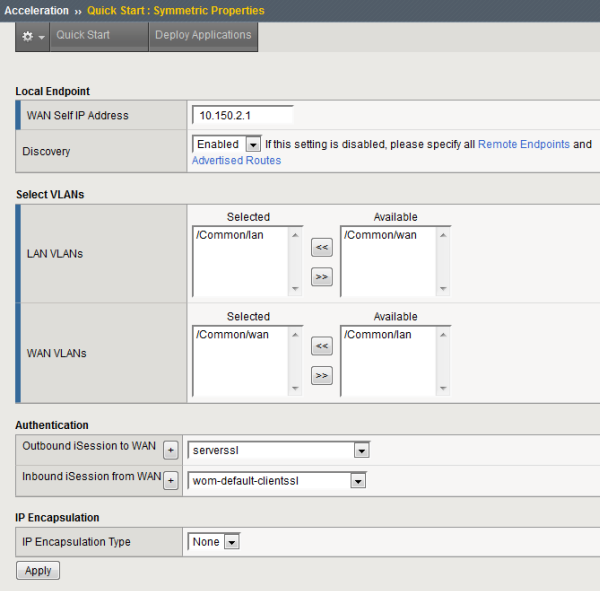 To complete the setup, repeat this task on the BIG-IP system on the other side of the WAN. After you configure the iSession™ endpoints, use an iApp template to select the application traffic for optimization. Click Acceleration > Quick Start > Deploy Applications . Click Create, from the Template list select f5.replication, and follow the online instructions.

At this point, you have finished configuring the iSession™ connection on BIG-IP® systems at opposite sides of the WAN, and the systems have discovered their remote endpoints.
Important: Use this task as a checkpoint to allow for troubleshooting before you complete the setup.
You can validate the configuration using the browser and command-line interfaces.

After you complete the tasks in this implementation, the BIG-IP® system is configured in a routed deployment. For symmetric optimization using an iSession™ connection, you must also configure the BIG-IP system on the other side of the WAN. The other BIG-IP deployment can be in bridge, routed, or one-arm mode.