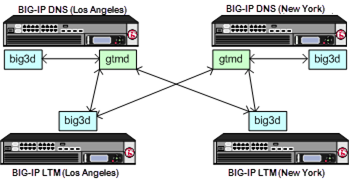 Determine the self IP addresses of the BIG-IP® systems that you want to upgrade with the latest big3d agent. Ensure that port 22 is open on these systems.
Run the big3d_install script on the DNS system you are adding to your network. This upgrades the big3d agents on the other BIG-IP systems on your network. It also instructs these systems to authenticate with the other BIG-IP systems through the exchange of SSL certificates. For additional information about running the script, see SOL1332 on AskF5.com (www.askf5.com).
Note: You must perform this task from the command-line interface.
Important: All target BIG-IP systems must be running the same or an older version of BIG-IP software.
The SSL certificates are exchanged, authorizing communications between the systems. The big3d agent on each system is upgraded to the same version as is installed on the BIG-IP DNS system from which you ran the script.