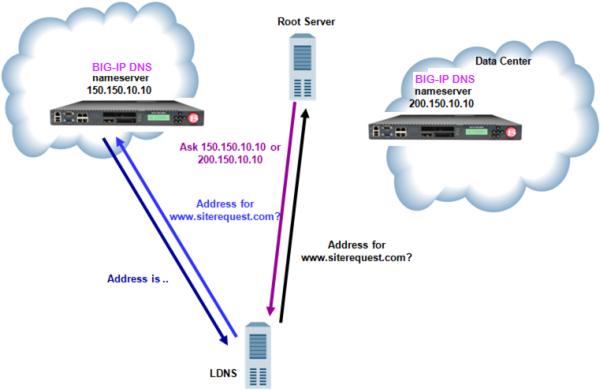 Perform these tasks to replace a DNS server with BIG-IP DNS.

When you want to improve the speed of responses to DNS queries you can configure a BIND server to allow zone transfers only to the DNS Express™ engine on the BIG-IP system. You do this by adding an allow-transfer statement to named.conf on the BIND server.

To avoid a conflict on your network, unplug BIG-IP® DNS from the network.
When you want BIG-IP DNS to handle DNS traffic previously handled by a DNS server, create a self IP address on BIG-IP DNS using the IP address of the legacy DNS server.

Designating BIG-IP DNS as the primary server for the zone

Ensure that at least one load balancing pool exists in the configuration before you start creating a wide IP.
Create a wide IP to map an FQDN to one or more pools of virtual servers that host the content of the domain.

BIG-IP® DNS replaces the legacy DNS server as the primary authoritative name server for the zone. BIG-IP DNS handles all incoming DNS traffic, whether destined for a wide IP or handled by the BIND instance on the system.