What is per-app VPN?

Apple's Network Extension framework supports layer-3 tunneling for both device-wide and Per-App VPN tunnels. This means that TCP and UDP protocols are supported for apps configured for Per-App VPN on F5 Access for iOS 2018. Apps that are managed by a Mobile Device Manager (MDM) can be configured to automatically connect to a VPN when they are started. In addition, Mobile Safari can be managed for per-app VPN with a configuration profile and without an MDM. Per-app VPN gives IT granular control over corporate network access, and ensures that data transmitted by managed apps travels only through a VPN. Meanwhile, other data, like an employee's personal web browsing activity, does not use the VPN. Per-app VPN also works with Safari on a per-URL basis.

About deploying MDM apps over VPNs

The per-app VPN framework allows the administrator to limit VPN access to explicit apps only. Specifically, it allows applications to use one F5 Access configuration (or VPN connection).

Important: Once an app is associated with an F5 Access configuration by the MDM, it will use that VPN only.

In this example, App 1 or App 2 can be active at the same time, because they use different VPN configurations. 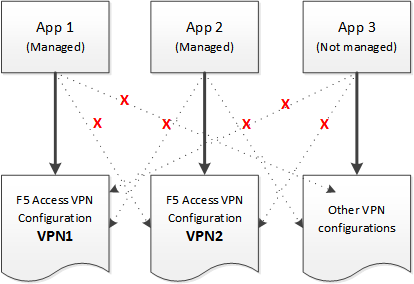 Note: On iOS, you can only activate only one device-wide (user-initiated) VPN configuration at a time. However, multiple per-app VPNs can be active and connected simultaneously, on their own or in addition to the device VPN.

A version check allows you to distinguish between F5 Access for iOS 3.0.0 and earlier versions. You can use this information to assign the required full network access resource to the 3.0.0 branch, for example, in a Per-App VPN scenario.
The access profile appears in the Access Profiles List.
Configure the virtual server to include this access policy, and make sure the Client SSL profile is enabled on the server.

A client certificate check allows you to authenticate the device to the access policy, without requiring any user interaction that would cause the creation of the per-app VPN tunnel to fail.
The access profile appears in the Access Profiles List.
Configure the virtual server to include this access policy, and make sure the Client SSL profile is enabled on the server.

Note: Access policies for F5 Access version 2.1.x have different requirements. If you are planning to have both clients connect to the same virtual server, refer to your F5 Acccess 2.1.0 documentation for more information.

The virtual server is configured for per-app VPN.
Table of Contents | << Previous Chapter | Next Chapter >>