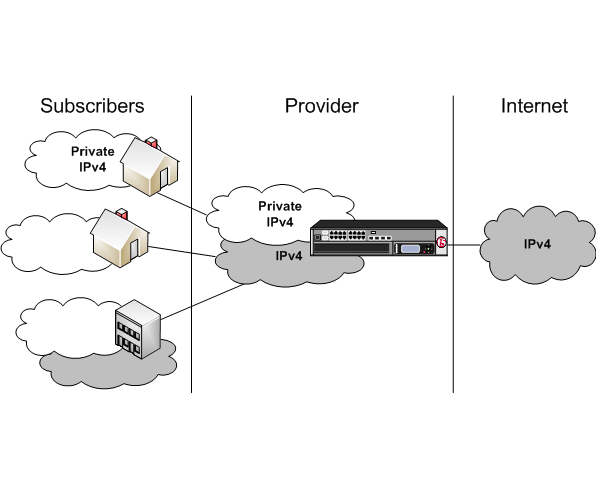 Diagram of a NAT44 network

The CGNAT module must be enabled through the System > Resource Provisioning screen before you can create LSN pools.
Large Scale NAT (LSN) pools are used by the CGNAT module to allow efficient configuration of translation prefixes and parameters.
Your LSN pool is now ready, and you can continue to configure your CGNAT.

Creating a virtual server for an LSN pool

An ALG profile provides the CGNAT module with protocol and service information to make specified packet modifications to the IP and TCP/UDP headers, as well as the payload during translation.
Important: Edit only copies of the included ALG profiles to avoid unwanted propagation of settings to other profiles that use the included profiles as parents.
You now have an ALG profile for use by CGNAT.

You create iRules® to automate traffic forwarding for XML content-based routing. When a match occurs, an iRule event is triggered, and the iRule directs the individual request to an LSN pool, a node, or virtual server.
You now have an iRule to use with a CGNAT virtual server.
Table of Contents | << Previous Chapter | Next Chapter >>