On failover, traffic_group_1 becomes active on another device in the Sync-Failover device group

A device in the trust domain can be a member of both a Sync-Failover group and a Sync-Only group simultaneously.

For devices in a Sync-Failover group, the BIG-IP system uses both the device group and the traffic group attributes of a folder to make decisions about which devices to target for synchronizing the contents of the folder, and which application-related configuration objects to include in failover.

You can control the way that the BIG-IP chooses a target failover device. This control is especially useful when a device group contains heterogeneous hardware platforms that differ in load capacity, because you can ensure that when failover occurs, the system will choose the device with the most available resource to process the application traffic.

Device group B is also a standard active-standby configuration, in which Bigip3 normally processes traffic for application B. This means that Bigip3 and Bigip4 synchronize their configurations, and Bigip3 fails over to Bigip4 if Bigip3 becomes unavailable. Bigip3 cannot fail over to Bigip1 or Bigip2 because those devices are in a separate device group. 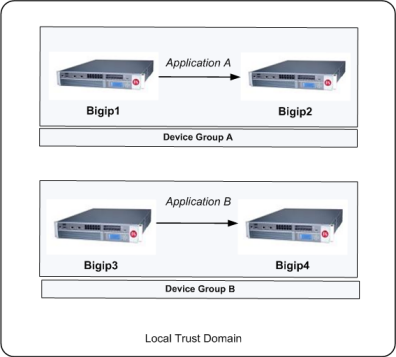 This task establishes failover capability between two or more BIG-IP devices. If an active device in a Sync-Failover device group becomes unavailable, the configuration objects fail over to another member of the device group and traffic processing is unaffected. You perform this task on any one of the authority devices within the local trust domain.

Repeat this task for each Sync-Failover device group that you want to create for your network configuration.

You now have a Sync-Failover type of device group containing BIG-IP devices as members. 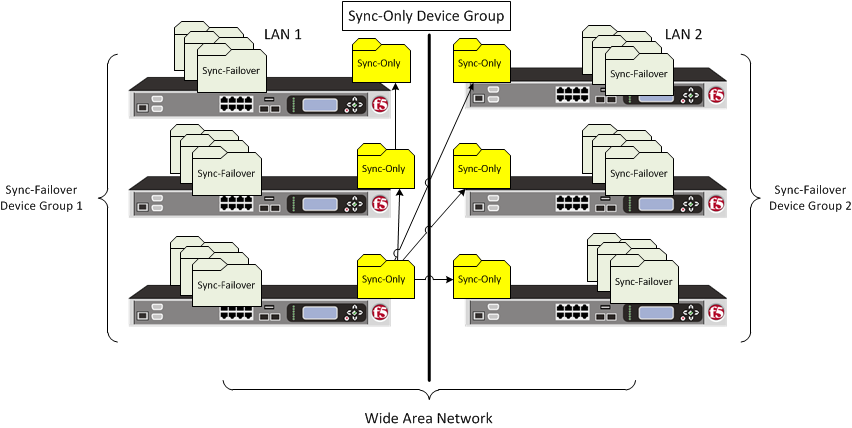 To implement this configuration, you can follow this process:

You perform this task to create a Sync-Only type of device group. When you create a Sync-Only device group, the BIG-IP system can then automatically synchronize configuration data (such as security policies and acceleration applications) to the other devices in the group, even when some of those devices reside in another network.
Note: You perform this task on any one BIG-IP device within the local trust domain; there is no need to repeat this process on the other devices in the device group.
You now have a Sync-Only type of device group containing BIG-IP devices as members.

You can perform this task when you want to display a list of the device groups of which the local device is a member. This list also displays other information such as the sync status of each device group and whether Auto Sync is enabled.

Viewing the members of a device group

You can list the members of a device group and view information about them, such as their management IP addresses and host names.
The screen shows a list of the device group members.

Adding a device to a device group

You must ensure that the device you are adding is a member of the local trust domain.
You can use this procedure to add a member to an existing device group.

A note about folders and overlapping device groups

Sometimes when one BIG-IP object references another, one of the objects gets synchronized to a particular device, but the other object does not. This can result in an invalid device group configuration.

For example, suppose you create two device groups that share some devices but not all. In the following illustration, Device A is a member of both Device Group 1 and Device Group 2.

One device with membership in two device groups

Now suppose that you create a pool in the /Common/my_app folder, which is associated with Device Group 2. When you create the pool members in that folder, the BIG-IP system automatically creates the associated node addresses and puts them in folder /Common. This results in an invalid configuration, because the node objects in folder /Common do not get synchronized to the device on which the nodes' pool members reside, Device C. When an object is not synchronized to the device on which its referenced objects reside, an invalid configuration results.