This implementation describes how to use the Setup utility to configure two new BIG-IP® devices that function as an active-active pair. An active-active pair is a pair of BIG-IP devices configured so that both devices are actively processing traffic and are ready to take over one another if failover occurs. The two devices synchronize their configuration data to one another.

You then use the BIG-IP® Configuration utility to:

If one of the devices becomes unavailable for any reason, the other device automatically begins processing traffic for the unavailable peer, while continuing to process the traffic for its own application.

This illustration shows an example of the device group that this implementation creates, named Device Group A. This device group contains two BIG-IP devices, Device 1 and Device 2. 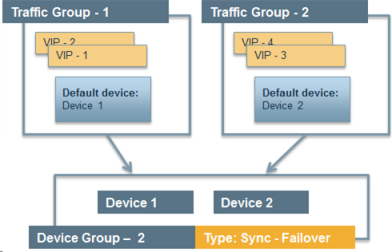 Important: For active-active configurations, you must enable network failover instead of hard-wired serial failover.

The BIG-IP® configuration process begins with running the Setup utility on each of the two BIG-IP devices. Once you have completed that task, you can log into either of the BIG-IP devices and perform all of the remaining tasks, on that device only. This results in both BIG-IP devices being configured properly for an active-active implementation.

Important: After using the Setup utility to create a redundant system configuration, you can re-enter the utility at any time to adjust the configuration. Simply click the F5 logo in the upper-left corner of the BIG-IP Configuration utility, and on the Welcome screen, click Run the Setup Utility. Then page through the utility to find the appropriate screens.

You can use the Setup utility to specify self IP addresses and settings for a VLAN on the BIG-IP® internal network. The default VLAN for the internal network is named internal.

You can use the Setup utility to specify self IP addresses and settings for a VLAN on the BIG-IP® external network. The default VLAN for the external network is named external.

Before you begin this task, verify that:

Creating an iApp application for the local device

Use this procedure to create a set of related configuration objects on the system (that is, an application).
You now have an iApp application service, which is associated with the traffic group assigned to the root folder, traffic-group-1.

Creating a traffic group for a remote device

Creating an iApp application for a remote device