Sometimes a traffic group within a BIG-IP® Sync-Failover device group needs a certain number of resources to be up: resources like pool members, trunk links, VIPRION ®cluster members, or some combination of these.

With HA groups, you can define the minimum number of resources that a traffic group needs to stay active on its current device. If resources fall below that number, the traffic group fails over to a device with more resources. An HA group:

The step-by-step tasks in this document guide you through creating the example configuration shown in the illustration. The illustration shows three sample devices with two active traffic groups. We've configured both traffic groups to use HA groups to define acceptable criteria for trunk health. Although it's not shown here, we'll assume that traffic-group-1 and traffic-group-2 use the HA Score and the Preferred Device Order failover methods, respectively, to pick their next-active devices. 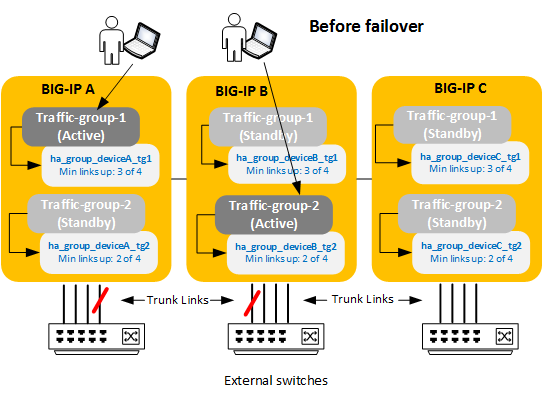 In our example, we see that on both BIG-IP A and BIG-IP B, three of four trunk links are currently up, which meets the minimum criteria specified in the HA groups assigned to traffic-group-1 and traffic-group-2 on those devices. This allows each traffic group to stay active on its current device.

Now suppose that the trunk on BIG_IP A loses another link. We see that even though BIG-IP A is still up, traffic-group-1 has failed over because BIG-IP A no longer meets the HA group criteria for hosting the traffic group: only two of four trunk links are now up on that device. 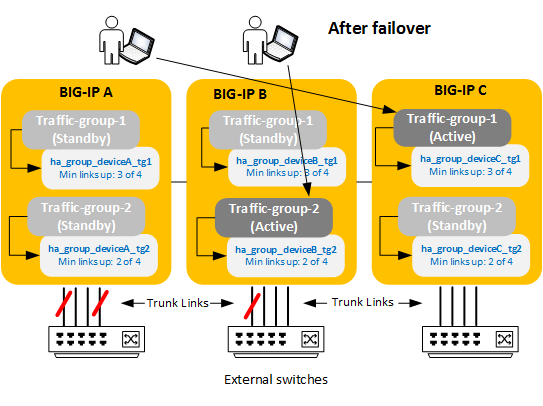 Because we've configured traffic-group-1 to use HA scores to select the next-active device, the traffic group fails over to BIG-IP C, because this is the device with the most trunk links up and therefore has the highest HA score for hosting this traffic group.

As for traffic-group-2, it stays on its current device because BIG-IP B still meets the minimum criteria specified in its HA group.

The remainder of this document provides the step-by-step instructions you'll need to implement this example.

To create the sample HA groups configuration described in this document, make sure that you have:

Knowledge of F5 Networks® device service clustering (DSC®)
You'll need a working knowledge of Sync-Failover device groups, including traffic groups and BIG-IP® config sync and failover operations.
The Administrator user role
Your BIG-IP® user account must have the Administrator user role assigned to it.
A working Sync-Failover device group
The device group should contain three BIG-IP® devices with failover capability working successfully.
Two VLANs per device
At a minimum, each device should have a VLAN for the external network and another for the internal network.
An active traffic group on BIG-IP A and another on BIG-IP B
Each traffic group should contain:
A trunk on each device
Each BIG-IP device should have a 4-link trunk.

Task summary for optimizing BIG-IP resources for an application flow

There are a few tasks you need to perform to optimize BIG-IP resources (such as trunk links) for an application flow.

Important: Before you start, make sure that traffic-group-1 is active on BIG-IP A. This will prevent unintentional failover.

This task assigns trunk health criteria (an HA group) to traffic-group-1 on all devices. You can also use this task to direct the BIG-IP® system to pick the next-active device for traffic-group-1 based on the HA scores of the other BIG-IP devices.

After you complete this task, traffic-group-1 on each device has trunk criteria assigned to it, and the BIG-IP system will pick the device with the highest HA score to be the next-active device for traffic-group-1 .

Important: Before you start, make sure that traffic-group-2 is active on BIG-IP B. This will prevent unintentional failover.

This task associates trunk health criteria (that is, an HA group) with traffic-group-2 on BIG-IP B. You can also use this task to direct the BIG-IP® system to pick the next-active device for traffic-group-2 based on an ordered list of the devices in the device group.

This task synchronizes the latest BIG-IP® configuration data from BIG-IP B, including the active instance of traffic-group-2, to the other devices in the device group.
Important: If you enabled automation synchronization for your device group, you can skip this task. Also, be aware that the BIG-IP system never syncs an HA group or the value of the HA Group property of a traffic group during a config sync operation.

You use this task to assign trunk health criteria (an HA group) to traffic-group-2 on BIG-IP A and BIG-IP C.

After you do this task, an HA group is assigned to BIG-IP A and BIG-IP C for traffic-group-2. The BIG-IP® system can now pick the next-active device for traffic-group-2 based on a list of devices in a preferred order. The BIG-IP system will use the calculated HA score on each device to decide whether a device in the list is eligible to become the next-active device. Any device with a non-zero score is eligible.

After you have completed the tasks in this document, based on our sample configuration, the BIG-IP® system manages high availability for the traffic groups in these ways:

The HA score on a device for a traffic group is the sum of all HA score contributions from the resources defined in the relevant HA group.

This means that if an HA group on a device had multiple trunks defined and any one of those trunks failed to meet the minimum availability criteria (resulting in a score of 0), the full HA score on the device for the traffic group would be 0.

If you intentionally set a resource's minimum threshold to 0, and all of the resource's links go down, then the resulting score is whatever the other resources contribute, which in the case of the above example would be 50.

You can view the HA score for a traffic group on a particular device using the BIG-IP® Configuration utility.

View the HA score for a traffic group using tmsh

You can view the HA score for a traffic group on a particular device using the Traffic Management shell (tmsh) .