In some network configurations, the BIG-IP® system is configured to send application traffic to destination servers that are implemented as VMware® virtual machines (VMs). These VMs can undergo live migration, using VMware vMotion, across a wide area network (WAN) to a host in another data center. Optionally, an iSession® tunnel could provide WAN optimization.

To preserve any existing connections between the BIG-IP system and a virtual machine while the virtual machine migrates to another data center, you can create an EtherIP tunnel.

An EtherIP tunnel is an object that you create on each of two BIG-IP systems that sit on either side of a WAN. The EtherIP tunnel uses the industry-standard EtherIP protocol to tunnel Ethernet and IEEE 802.3 media access control (MAC) frames across an IP network. The two EtherIP tunnel objects together form a tunnel that logically connects two data centers. When the application traffic that flows between one of the BIG-IP systems and the VM is routed through the EtherIP tunnel, connections are preserved during and after the VM migration.

Illustration of EtherIP tunneling in a VMotion environment 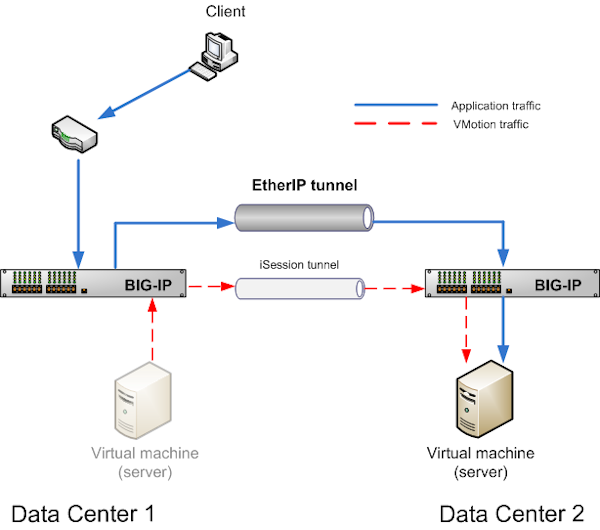 Implement an EtherIP tunneling configuration to prevent the BIG-IP® system from dropping existing connections to migrating virtual machines in a VMware VMotion environment.

Important: Perform these tasks on the BIG-IP system in both the local data center and the remote data center.

VLANs represent a logical collection of hosts that can share network resources, regardless of their physical location on the network. You create a VLAN to associate physical interfaces with traffic destined for a specific address space. For the most basic BIG-IP® system configuration with redundancy enabled, you typically create multiple VLANs. That is, you create a VLAN for each of the internal and external networks, as well as a VLAN for high availability communications. If your hardware platform supports ePVA, you have the additional option of configuring double tagging (also known as Q-in-Q tagging) for a VLAN.

After you create the VLAN, you can assign the VLAN to a self IP address.
After creating the VLAN, ensure that you repeat this task to create as many VLANs as needed.

Before you perform this task, you must know the self IP address of the instance of the VLAN that exists, or will exist, on the BIG-IP® system in the other data center.
The purpose of an EtherIP tunnel that contains an EtherIP type of profile is to enable the BIG-IP system to preserve any current connections to a server that is using VMware vMotion for migration to another data center.

Creating a self IP address

A self IP address enables the BIG-IP® system and other devices on the network to route application traffic through the associated VLAN or VLAN group. When you do not intend to provision the vCMP® feature, you typically create self IP addresses when you initially configure the BIG-IP system on the VIPRION® platform.

After you perform this task, the BIG-IP system can send and receive traffic through the specified VLAN or VLAN group. If the self IP address is member of a floating traffic group and you configure the system for redundancy, the self IP address can fail over to another device group member if necessary.

Creating a self IP for a VLAN group

After the tunnel is established, the BIG-IP system preserves any open connections to migrating (or migrated) virtual machine servers.