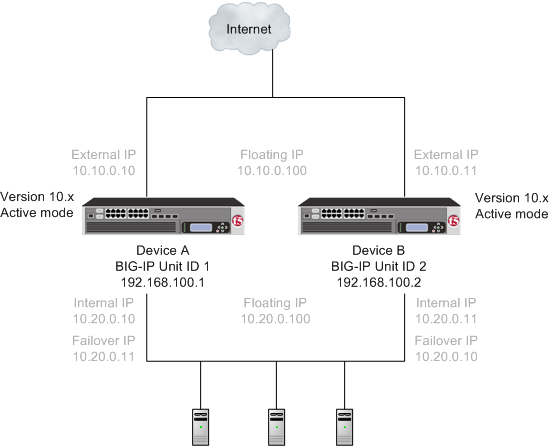 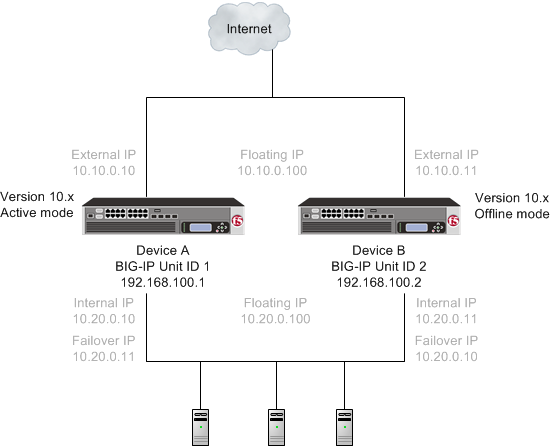 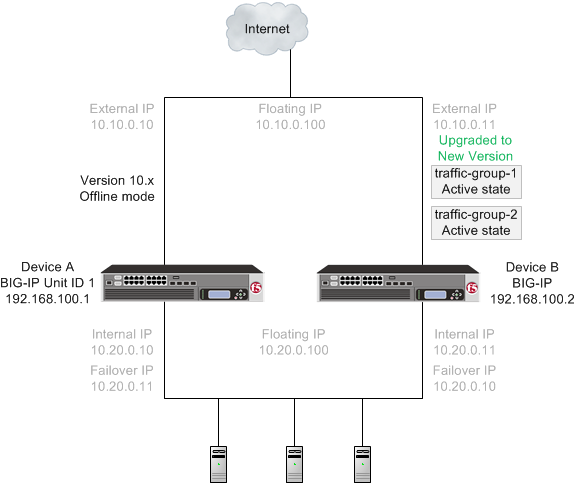 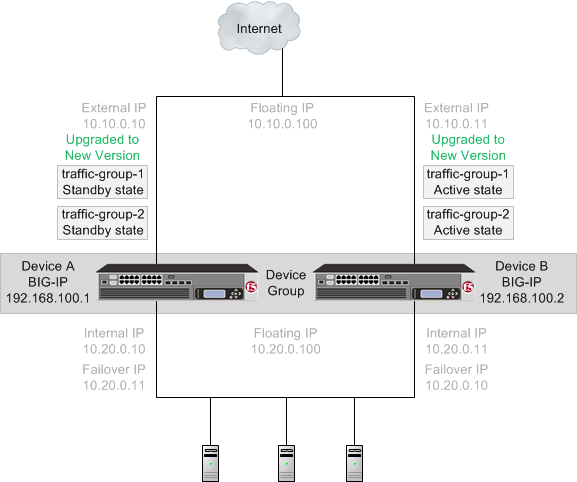 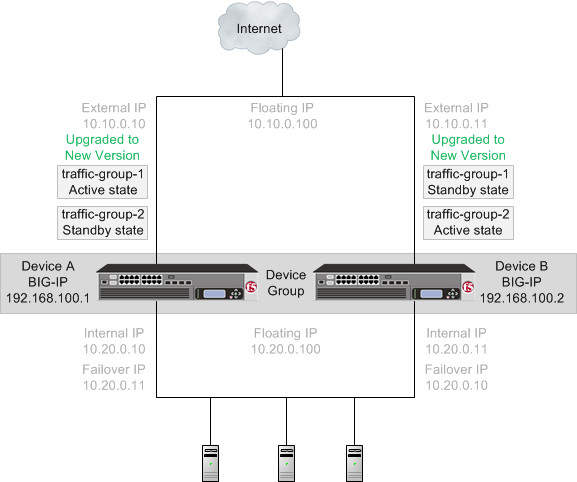 An upgrade of BIG-IP active-active systems to the new version software involves the following tasks.

Device service clustering (DSC) is based on a few key components.

Devices
A device is a physical or virtual BIG-IP system, as well as a member of a local trust domain and a device group. Each device member has a set of unique identification properties that the BIG-IP system generates. For device groups configured for failover, it is important that the device with the smallest capacity has the capacity to process all traffic groups. This ensures application availability in the event that all but one device in the device group become unavailable for any reason.
Device groups
A device group is a collection of BIG-IP devices that trust each other and can synchronize, and sometimes fail over, their BIG-IP configuration data. You can create two types of devices groups: A Sync-Failover device group contains devices that synchronize configuration data and support traffic groups for failover purposes when a device becomes unavailable. A Sync-Only device group contains devices that synchronize configuration data, such as policy data, but do not synchronize failover objects. The BIG-IP system supports either homogeneous or heterogeneous hardware platforms within a device group.
Important: BIG-IP module provisioning must be equivalent on all devices within a device group. For example, module provisioning is equivalent when all device group members are provisioned to run BIG-IP Local Traffic Manager (LTM) and BIG-IP Application Security Manager (ASM) only. Maintaining equivalent module provisioning on all devices ensures that any device in the device group can process module-specific application traffic in the event of failover from another device.
Traffic groups
A traffic group is a collection of related configuration objects (such as a virtual IP address and a self IP address) that run on a BIG-IP device and process a particular type of application traffic. When a BIG-IP device becomes unavailable, a traffic group can float to another device in a device group to ensure that application traffic continues to be processed with little to no interruption in service.
Device trust and trust domains
Underlying the success of device groups and traffic groups is a feature known as device trust. Device trust establishes trust relationships between BIG-IP devices on the network, through mutual certificate-based authentication. A trust domain is a collection of BIG-IP devices that trust one another and can therefore synchronize and fail over their BIG-IP configuration data, as well as exchange status and failover messages on a regular basis. A local trust domain is a trust domain that includes the local device, that is, the device you are currently logged in to.
Folders
Folders are containers for the configuration objects on a BIG-IP device. For every administrative partition on the BIG-IP system, there is a high-level folder. At the highest level of the folder hierarchy is a folder named root. The BIG-IP system uses folders to affect the level of granularity to which it synchronizes configuration data to other devices in the device group.

A traffic group is a collection of related configuration objects, such as a floating self IP address, a virtual IP address, and a SNAT translation address, that run on a BIG-IP device. Together, these objects process a particular type of application traffic on that device. When a BIG-IP device becomes unavailable, a traffic group floats (that is, fails over) to another device in a device group to ensure that application traffic continues to be processed with little to no interruption in service. In general, a traffic group ensures that when a device becomes unavailable, all of the failover objects in the traffic group fail over to any one of the available devices in the device group.

Note: A Sync-Failover device group can support a maximum of 15 floating traffic groups.

About forcing a device offline

The BIG-IP system allows administrative connections to the management address to continue, but handles administrative connections to self IP addresses differently, depending on the platform:
Note: When you force a chassis system offline, the Traffic Management Microkernel (TMM) interfaces remain configured until the unit is rebooted. If the chassis is rebooted while Force Offline is enabled, the system marks all TMM interfaces as Uninitialized or Missing. This behavior is by design. The system will not attempt to initialize and bring up TMM interfaces while the system is in the offline state.

When you force VIPRION platforms offline, make sure to manage the system by using the management port or console. The system terminates connections to self IP addresses when you force the platform offline.

You will want to force the standby devices offline before you change the redundancy state (such as resetting the device trust for a device group). Forcing standby devices into offline state prevents a standby device from unexpectedly becoming active.

Before you upgrade the BIG-IP system from version 10.x to the new version software, you might need to manually prepare settings or configurations for specific modules.

The BIG-IP Application Security Manager (ASM) system does not require specific preparation when upgrading from version 10.x to the new version software. No additional configuration is required after completing the upgrade to the new software version.

If you update two redundant systems that are running as an active-standby pair with BIG-IP Application Security Manager (ASM) and BIG-IP Local Traffic Manager (LTM) provisioned, the system maintains the active-standby status and automatically creates a Sync-Failover device group and a traffic group containing both systems. The device group is enabled for BIG-IP ASM (because both systems have ASM provisioned).

You can manually push or pull the updates (including BIG-IP LTM and ASM configurations and policies) from one system to the other (Device Management > Overview, click the name of a device, and choose Sync Device to Group or Sync Group to Device).

Before you upgrade the BIG-IP WebAccelerator modules from version 10.x to an Application Acceleration Manager new software version, you need to prepare the systems, based on your configuration. The following table summarizes the applicable tasks that you need to complete.

BIG-IP WAN Optimization Manager (WOM) systems do not require specific preparation when upgrading from version 10.x to the new version software. However, in a redundant system configuration, you must upgrade the standby system first (to avoid interrupting traffic on the active system), and then upgrade the other system. No additional configuration is required after completing the upgrade to the new version software.

The following prerequisites apply for this task.
After you prepare Device A (the active BIG-IP 1 system) and Device B (the active BIG-IP 2 system) for upgrading the software, you can perform these steps to install the new version software onto Device B.
The new version software is installed on Device B, with traffic-group-1 and traffic-group-2 in standby state.

The following prerequisites apply in upgrading Device A (the BIG-IP 1 system).
After you prepare Device A (the active BIG-IP 1 system) for upgrading the software, you can perform these steps to upgrade the software to the new version software.
The new version software is now installed on Device A, with traffic-group-1 and traffic-group-2 in standby state.

Changing states of the traffic groups

Viewing a list of traffic groups for a device