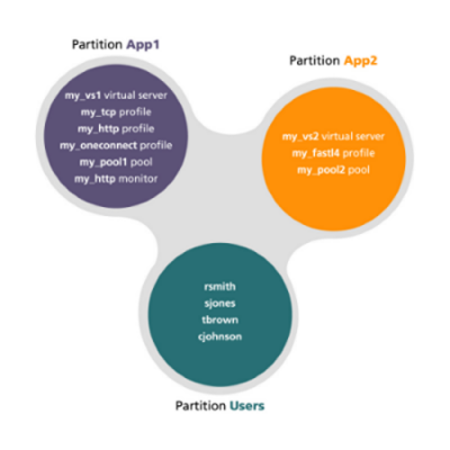 For every administrative partition on the BIG-IP system, the system creates an equivalent high-level folder with an equivalent name.

With respect to permissions, all users on the system except those with a user role of No Access have read access to objects in partition Common. When a user displays a list of a particular type of configuration object, the system displays not only the objects of that type within the user's current partition, but also the same type of object in Common. For example, if a user lists all virtual servers within the user's current partition (such as partition A), the list also shows the virtual servers in Common. In this case, unless the user has write access to Common, the virtual servers in Common are read-only for that user.

A user who has been granted access to one or more partitions, as well as all partitions, can actively select the current partition, that is, the specific partition he or she wants to view or manage. For example:

Certain BIG-IP® system objects, such as virtual servers, can reference other objects. Examples of objects that a virtual server can reference are pools, profiles, and iRules®. On the BIG-IP system, there are rules for object referencing with respect to the administrative partitions in which those objects reside.

The rules for valid object referencing are:

Object referencing is restricted in these ways: