As IPv4 addresses are becoming depleted, service providers (DSL, cable, and mobile) face the challenge of supplying IP addresses to new customers. Providing IPv6 addresses alone is often not workable, because most of the public Internet still uses only IPv4, and many customer systems do not yet fully support IPv6. The Dual-Stack Lite (DS-Lite) tunneling technology is one solution to this problem. DS-Lite gives service providers the means to migrate to an IPv6 access network without changing end user devices or software.

DS-Lite is an IPv4-to-IPv6 transition technology, described in RFC 6333, that uses tunneling and network address translation (NAT) to send IPv4 packets over an IPv6 network. This technology makes it possible, for example, for a service provider with an IPv6 backbone to properly route traffic while overlapping IPv4 networks.

How does DS-Lite work?

The customer-premises equipment (CPE), known as the B4 (Basic Bridging BroadBand) device, encapsulates the IPv4 packets inside IPv6 packets, and sends them to the AFTR (Address Family Transition Router) device. The AFTR device includes carrier-grade NAT (CGNAT), which has a global IPv4 address space. The AFTR device decapsulates the IPv4 traffic and performs address translation, as it sends the traffic to the external IPv4 network.

How does F5 implement DS-Lite?

Illustration of a DS-Lite deployment

In this example, a service provider transports encapsulated IPv4 traffic over its IPv6 network. 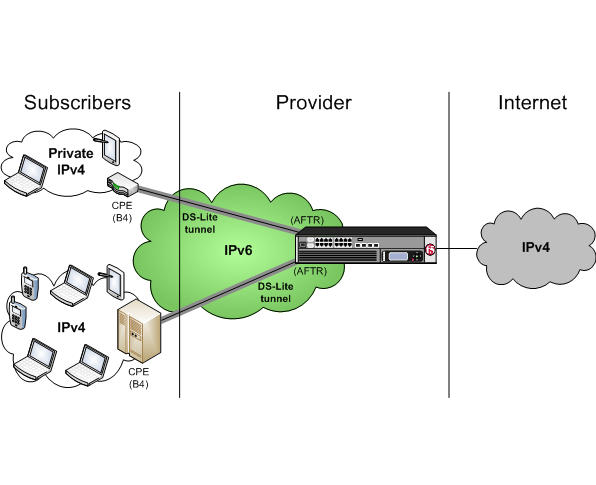 Example of a DS-Lite configuration

Note: At present hairpinning works with all BIG-IP CGNAT scenarios except NAT64.

When you set up DS-Lite, you must configure devices at both ends of the tunnel: the B4 device and the AFTR device. For this implementation, the AFTR device is a BIG-IP® system.

Before you configure the AFTR device, set up your CPE as a B4 device, and configure it to send traffic to the v6 self IP address of the BIG-IP® system. For instructions, consult the manufacturer's documentation for your device.

Before you configure the tunnel, ensure that the BIG-IP® device you are configuring has an IPv6 address.
You can create a DS-Lite (wildcard) tunnel for terminating IPv4-in-IPv6 tunnels to remote B4 devices, and recycling the IPv4 address space.
You have now created a DS-Lite tunnel that functions as an AFTR (Address Family Translation Router) device.

Assigning a self IP address to an AFTR device

Ensure that you have created a DS-Lite tunnel before you start this task.
Self IP addresses can enable the BIG-IP® system, and other devices on the network, to route application traffic through the associated tunnel.

Before starting this task, ensure that CGNAT is licensed and the feature module enabled on the BIG-IP® system, and you have created at least one LSN pool.
When you are configuring DS-Lite, you must set up a forwarding virtual server to provide the Large Scale NAT (LSN), which is specified by the DS-Lite tunnel as an augmented flow lookup.
This virtual server now intercepts traffic leaving the DS-Lite tunnel, provides the LSN address translation, and forwards the traffic to the IPv4 gateway.

After you configure DS-Lite on a BIG-IP® system, you can check the statistics for the tunnel to verify that traffic is passing through it.
Table of Contents | << Previous Chapter | Next Chapter >>