The benefit of an HSM that supports FIPS multi-tenancy is that you can create a virtual HSM (known as a FIPS partition) for each vCMP guest that processes FIPS-related traffic. A FIPS partition is a portion of SSL cores and private key slots on the HSM that a host administrator can dedicate to a vCMP guest for SSL acceleration and storage of FIPS keys.

This illustration shows a sample multi-tenant configuration on two vCMP hosts in a high-availability configuration. 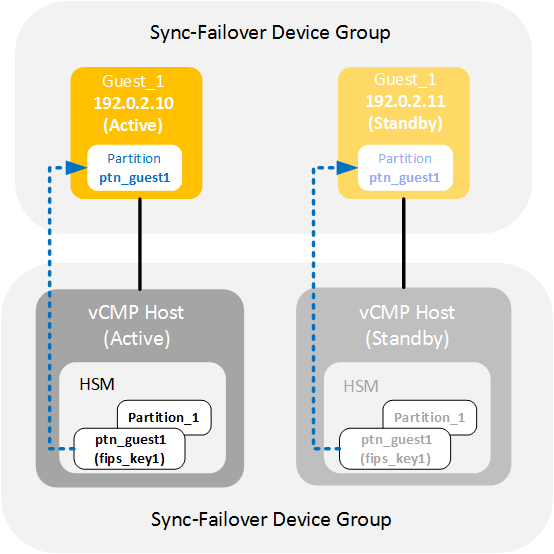 In this example, two systems are configured as vCMP hosts and are members of a BIG-IP Sync-Failover device group (one member is active and the other standby), and each system hosts a guest named Guest_1. Each system also contains a hardware security module (HSM) with two FIPS partitions - the default partition, named PARTITION_1, and a second partition named ptn_guest1.

The guests, too, reside in a Sync-Failover device group and are configured identically except for their cluster management IP addresses, 192.0.2.10 and 192.0.2.11. When creating each guest, the host administrator assigned the FIPS partition ptn_guest1 to the guest. The two partitions are identical with respect to name, the amount of key storage allowed for the guest, and the maximum number of FIPS cores available to the guest.

Each instance of partition ptn_guest1 on its respective HSM stores an SSL key named fips_key1.

With this setup, if failover occurs, both the active vCMP host configuration and its active guest configuration will fail over to their respective high availability peers, and the new FIPS partition and SSL key will be preserved.