A VLAN is a logical subset of hosts on a local area network (LAN) that operate in the same IP address space. Grouping hosts together in a VLAN has distinct advantages. For example, with VLANs, you can:

The way that you group hosts into VLANs is by using the BIG-IP Configuration utility to create a VLAN and associate physical interfaces with that VLAN. In this way, any host that sends traffic to a BIG-IP® system interface is logically a member of the VLAN or VLANs to which that interface belongs.

VLANs on a BIG-IP system

The BIG-IP® system is a port-based switch that includes multilayer processing capabilities. These capabilities enhance standard VLAN behavior, in these ways:

By default, the BIG-IP® system includes two VLANs, named internal and external. When you initially ran the Setup utility, you assigned the following to each of these VLANs:

A typical VLAN configuration is one in which you create the two VLANs external and internal, and one or more BIG-IP system interfaces assigned to each VLAN. You then create a virtual server, and associate a default load balancing pool with that virtual server. This figure shows a typical configuration using the default VLANs external and internal. 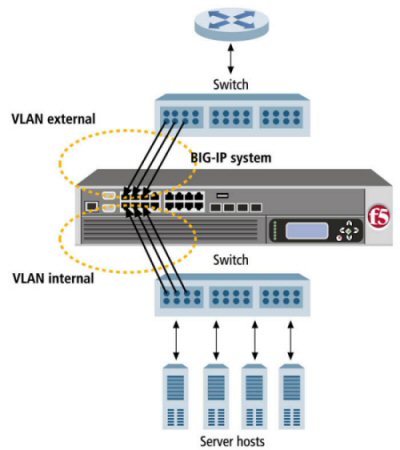 Important: In addition to configuring VLAN properties, you must also assign a self IP address to the VLAN.

When creating a VLAN, you must assign it a unique name. Once you have finished creating the VLAN, the VLAN name appears in the VLAN list.

A VLAN tag is useful when an interface has multiple VLANs associated with it; that is, when the interfaces you assigned to the VLAN are assigned as tagged interfaces. In this case, the BIG-IP system can read the VLAN tag in the header of a message to determine the specific VLAN in which the source or destination host resides.

For each VLAN that you create, you must assign one or more BIG-IP® system interfaces to that VLAN, using the Interfaces setting. When you assign an interface to a VLAN, you indirectly control the hosts from which the BIG-IP system interface sends or receives messages.

Tip: You can assign not only individual interfaces to the VLAN, but also trunks.

For example, if you assign interface 1.11 to VLAN A, and you then associate VLAN A with a virtual server, then the virtual server sends its outgoing traffic through interface 1.11, to a destination host in VLAN A. Similarly, when a destination host sends a message to the BIG-IP system, the host’s VLAN membership determines the BIG-IP system interface that should receive the incoming traffic.

With port-based access to VLANs, the BIG-IP® system accepts frames for a VLAN simply because they are received on an interface that is a member of that VLAN. With this method, an interface is an untagged member of the VLAN. Frames sent out through untagged interfaces contain no tag in their header.

When you add an interface to a VLAN as a tagged interface, the BIG-IP system associates the interface with the VLAN identification number, or tag, which becomes embedded in a header of a frame.

Note: Every VLAN has a tag. You can assign the tag explicitly when creating the VLAN, or the BIG-IP system assigns it automatically if you do not supply one.

Each time you add an interface to a VLAN, either when creating a VLAN or modifying its properties, you can designate that interface as a tagged interface. A single interface can therefore have multiple tags associated with it. 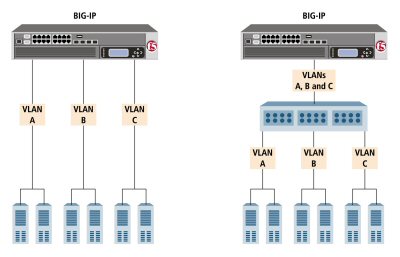 The configuration on the left shows a BIG-IP system with three internal interfaces, each a separate, untagged interface. This is a typical solution for supporting three separate customer sites. In this scenario, each interface can accept traffic only from its own VLAN.

When you enable source checking, the BIG-IP® system verifies that the return path for an initial packet is through the same VLAN from which the packet originated. Note that the system only enables source checking if the global setting Auto Last Hop is disabled.

The value that you configure for the maximum transmission unit, or MTU, is the largest size that the BIG-IP® system allows for an IP datagram passing through a BIG-IP system interface. By default, the BIG-IP system uses the standard Ethernet frame size of 1518 bytes (1522 bytes if VLAN tagging is used), with a corresponding MTU value of 1500 bytes for a VLAN.

One reason for changing the value of the MTU setting is when your BIG-IP platform supports jumbo frames. A jumbo frame is an Ethernet frame with more than 1500 bytes, and fewer than 9000 bytes, of payload.

If your BIG-IP platform does not support jumbo frames and a VLAN receives a jumbo frame, the system discards the frame.

VLAN fail-safe is a feature you enable when you want to base redundant-system failover on VLAN-related events. To configure VLAN fail-safe, you specify a timeout value and the action that you want the system to take when the timeout period expires.

When you create a VLAN, you can designate the VLAN as the last hop for TMM traffic.

You can use the DAG Round Robin setting on a VLAN to prevent stateless traffic from overloading a few TMM instances, a condition that can disable an entire BIG-IP system. When enabled, this setting causes the BIG-IP system to load balance the traffic among TMMs evenly, instead of using a static hash. Stateless traffic in this case includes non-IP Layer 2 traffic, ICMP, some UDP protocols, and so on. The default value for this setting is unchecked (disabled).

This feature is particularly useful for firewall and Domain Name System (DNS) traffic. For example, this feature prevents certain types of DDoS attacks, such as an ICMP DDoS attack that can overload the system by sending the same packets repeatedly to a specific subset of TMMs.

To enable the DAG Round Robin feature, log in to the BIG-IP Configuration utility, and on the navigation pane, locate the Main tab, expand Network, click VLANs, and click the Create button. Alternatively, instead of creating a new VLAN, you can enable this feature on an existing VLAN by displaying the list of VLANs on the system, and in the Name column, clicking the name of the VLAN you want to modify.

In addition to enabling the DAG Round Robin setting, you must also use the Traffic Management Shell (tmsh) to configure a bigdb variable that specifies the relevant destination ports. For example, you can use the command tmsh modify sys db dag.roundrobin.udp.portlist value "53:26:19:45" to specify that the system load balances packets destined for ports 53, 26, 19, or 45. The values that you specify with this BigDB variable apply to all VLANs on which the DAG Round Robin setting is enabled.

Note: The disaggregation of traffic occurs only to TMMs that are local to a given high-speed bridge (HSB).

The format of an entry in the L2 forwarding table is:

The BIG-IP system does not always need to use the L2 forwarding table to find an interface for frame transmission. For instance, if a VLAN has only one interface assigned to it, then the BIG-IP system automatically uses that interface.

You can change the sFlow settings for a specific VLAN when you want the traffic flowing through the VLAN to be sampled at a different rate than the global sFlow settings on the BIG-IP® system.

A VLAN group is a logical container that includes two or more distinct VLANs. VLAN groups are intended for load balancing traffic in a Layer 2 network, when you want to minimize the reconfiguration of hosts on that network. This figure shows an example of a VLAN group. 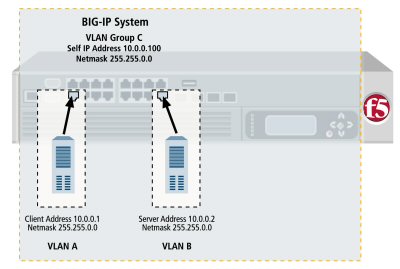 Example of a VLAN group

Tip: You can configure the behavior of the BIG-IP system so that it always creates a proxy for any ARP requests between VLANs.

When you create a VLAN group, the two existing VLANs become child VLANs of the VLAN group.

VLAN groups reside in administrative partitions. To create a VLAN group, you must first set the current partition to the partition in which you want the VLAN group to reside.

Note: Only users with the Administrator user role can create and manage VLAN groups.

The BIG-IP® system is capable of processing traffic using a combination of Layer 2 and Layer 3 forwarding, that is, switching and IP routing. When you set the transparency mode, you specify the type of forwarding that the BIG-IP system performs when forwarding a message to a host in a VLAN. The default setting is translucent, which means that the BIG-IP system uses a mix of Layer 2 and Layer 3 processing. The allowed values are:

When you enable the traffic bridging option, you are instructing the VLAN group to forward all non-IP traffic. Note that IP traffic is bridged by default. The default value for this setting is disabled (unchecked).

About traffic bridging with standby units

When enabled, the Bridge in Standby setting ensures that the VLAN group can forward packets when the system is the standby device of a redundant system configuration. Note that this setting applies to non-IP and non-ARP frames only, such as Bridge Protocol Data Units (BPDUs).

This setting is designed for deployments in which the VLAN group is defined on a redundant system. You can use the Bridge in Standby setting in transparent or translucent modes, or in opaque mode when the global variable Failover.Standby.LinkDownTime is set to 0.

The Migration Keepalive setting for a VLAN group, when enabled, instructs the BIG-IP® system to send keepalive frames (that is, TCP keepalives and empty UDP packets, depending on the connection type) when a node is moved from one VLAN group member to another VLAN group member for all existing BIG-IP connections to that node.

A host in a VLAN cannot normally communicate to a host in another VLAN. This rule applies to ARP requests as well. However, if you put the VLANs into a single VLAN group, the BIG-IP® system can perform a proxied ARP request.

Warning: Although hosts on an ARP exclusion list are specified using their IP addresses, this does not prevent the BIG-IP system from routing traffic to those hosts. A more secure way to prevent traffic from passing between hosts in separate VLANs is to create a packet filter for each VLAN.

VLAN association with a self IP address

If you explicitly create route domains, you should consider the following facts:

About bridging VLAN and VXLAN networks

You can configure Virtual eXtended LAN (VXLAN) on a BIG-IP® system to enable a physical VLAN to communicate with virtual machines (VMs) in a virtual network. 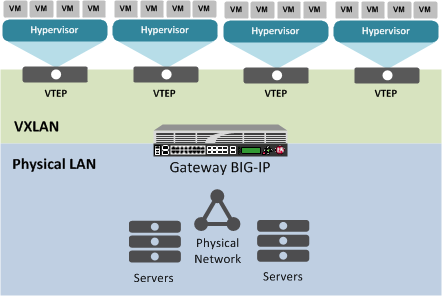 When you configure a BIG-IP system as an L2 VXLAN gateway, the BIG-IP system joins the configured multicast group, and can forward both unicast and multicast or broadcast frames on the virtual network. The BIG-IP system learns about MAC address and VTEP associations dynamically, thus avoiding unnecessary transmission of multicast traffic. 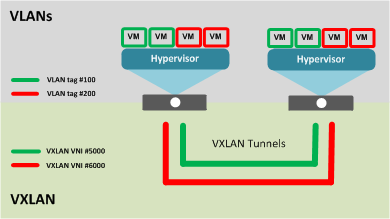 In a VMware vSphere 5.1 environment, you can configure VXLAN without knowing all the remote tunnel endpoints. The BIG-IP® system uses multicast flooding to learn unknown and broadcast frames. VXLAN can extend the virtual network across a set of hypervisors, providing L2 connectivity among the hosted virtual machines (VMs). Each hypervisor represents a VXLAN tunnel endpoint (VTEP). In this environment, you can configure a BIG-IP system as an L2 VXLAN gateway device to terminate the VXLAN tunnel and forward traffic to and from a physical network.