Note: The term interface refers to the physical ports on the BIG-IP system.

A BIG-IP system has two types of interfaces:

Each of the interfaces on the BIG-IP system has unique properties, such as the MAC address, media speed, duplex mode, and support for Link Layer Discovery Protocol (LLDP).

In addition to configuring interface properties, you can implement a feature known as interface mirroring, which you can use to duplicate traffic from one or more interfaces to another. You can also view statistics about the traffic on each interface.

Once you have configured the properties of each interface, you can configure several other features of the BIG-IP system that control the way that interfaces operate. For example, by creating a virtual local area network (VLAN) and assigning interfaces to it, the BIG-IP system can insert a VLAN ID, or tag, into frames passing through those interfaces. In this way, a single interface can forward traffic for multiple VLANs.

LLDP transmits device information in the form of LLDP messages known as LLDP Data Units (LLDPDUs). In general, this protocol:

Using the BIG-IP Configuration utility or tmsh, you can configure the BIG-IP system interfaces to transmit or receive LLDPDUs. More specifically, you can:

This figure shows a local LLDP-enabled BIG-IP system, configured to both transmit and receive LLDP messages from neighbor devices on a LAN. 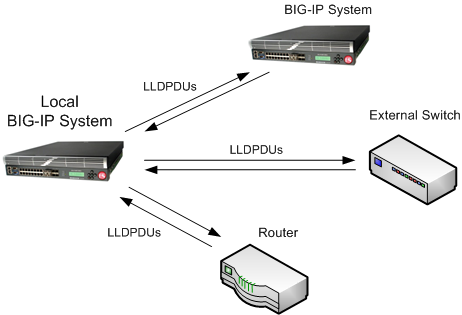 A local BIG-IP system that transmits and receives LLDPDUs

Each interface on the BIG-IP® system has a set of properties that you can configure, such as enabling or disabling the interface, setting the requested media type and duplex mode, and configuring flow control. Configuring the properties of each interface is one of the first tasks you do after running the Setup utility on the BIG-IP system. While you can change some of these properties, such as media speed and duplex mode, you cannot change other properties, such as the media access control (MAC) address.

Note: You can configure STP-related properties on an interface by configuring one of the Spanning Tree protocols.

Before configuring interface properties, it is helpful to understand interface naming conventions. Only users with either the Administrator or Resource Administrator user role can create and manage interfaces.

By convention, the names of the interfaces on the BIG-IP® system use the format <s>.<p> where s is the slot number of the network interface card (NIC), and p is the port number on the NIC. Examples of interface names are 1.1, 1.2, and 2.1. BIG-IP system interfaces already have names assigned to them; you do not explicitly assign them.

An exception to the interface naming convention is the management interface, which has the special name, MGMT.

About interface information and media properties

Using the BIG-IP Configuration utility, you can display a screen that lists all of the BIG-IP® system interfaces, as well as their current status (UP or DOWN). You can also view other information about each interface:

About the Ether Type property

The Ether Type property appears in the BIG-IP® Configuration utility only when the system includes ePVA hardware support. An ether type is a two-octet field in an Ethernet frame, used to indicate the protocol encapsulated in the payload. The BIG-IP system uses the value of this property when an interface or trunk is associated with a IEEE 802.1QinQ (double tagged) VLAN. By default, the system sets this value to 0x8100.

About the LLDP property

The LLDP property is one of two properties related to LLDP that you can configure for a specific interface. The possible values for this setting are:

Moreover, you can view statistics pertaining to any neighbor devices that have transmitted LLDP messages to the local BIG-IP® system.

The LLDP Attributes setting is one of two settings related to LLDP that you can configure for a specific interface. You use this interface setting to specify the content of an LLDP message being sent or received. Each LLDP attribute that you specify with this setting is optional and is in the form of Type, Length, Value (TLV).

When a BIG-IP® system interface receives LLDP messages from neighbor devices, the BIG-IP system displays chassis, port, and system information about the content of those messages. Specifically, the system displays values for the standard TLVs for each neighbor. These TLVs are:

Chassis ID
Identifies the chassis containing the IEEE 802 LAN station associated with the transmitting LLDP agent.
Port ID
Identifies the port component of the media service access point (MSAP) identifier associated with the transmitting LLDP agent.
Port description
An alpha-numeric string that describes the interface.
System name
An alpha-numeric string that indicates the administratively-assigned name of the neighbor device.
System description
An alpha-numeric string that is the textual description of the network entity. The system description should include the full name and version identification of the hardware type, software operating system, and networking software of the neighbor device.
System capabilities
The primary functions of the system and whether these primary functions are enabled.
Management address
An address associated with the local LLDP agent used to reach higher layer entities. This TLV might also include the system interface number that is associated with the management address, if known.

Configuring settings for an interface

You can use this procedure to configure the settings for an individual interface on the BIG-IP ®system.
After you perform this task, the interface is configured to send the specified LLDP information to neighbor devices.

Another powerful feature that you can use for BIG-IP system interfaces is trunking, with link aggregation. A trunk is an object that logically groups physical interfaces together to increase bandwidth. Link aggregation, through the use of the industry-standard Link Aggregation Control Protocol (LACP), provides regular monitoring of link status, as well as failover if an interface becomes unavailable.