Why should I use centralized management?

You can save time by using BIG-IQ® Centralized Management to manage and monitor multiple BIG-IP® devices and service configurations (such as Network Security and Access) from a single, central location.

With centralized management, you can:

What elements make up a centralized management solution?

An F5®BIG-IQ® Centralized Management solution can involve a number of different elements. The topology for these elements depends on your needs, and on whether you include data collection devices (DCDs) in your solution. A typical solution can include the following elements:

Using BIG-IQ Centralized Management, you can centrally manage your BIG-IP(R) devices, performing operations such as backups, licensing, monitoring, and configuration management. And because access to each area of BIG-IQ is role-based, you can limit access to users, thus maximizing work flows while minimizing errors and potential security issues.

A BIG-IP device runs a number of licensed components designed around application availability, access control, and security solutions. These components run on top of ®F5 TMOS®. This custom operating system is an event driven operating system designed specifically to inspect network and application traffic and make real-time decisions based on the configurations you provide. The BIG-IP software runs on both hardware and virtualized environments.

A data collection device (DCD) is a specially provisioned BIG-IQ system that you use to manage and store alerts, events, and statistical data from one or more BIG-IP systems.

Configuration tasks on the BIG-IP system determine when and how alerts or events are triggered on the client. The alerts or events are sent to a BIG-IQ data collection device, and the BIG-IQ system retrieves them for your analysis. When you opt to collect statistical data from the BIG-IP devices, the DCD periodically (at an interval that you configure) retrieves those statistics from your devices, and then processes and stores that data.

The remote storage device is necessary only when your deployment includes a data collection device (DCD) and you plan to store backups of your events, alerts, and statistical data for disaster recovery requirements. Remote storage is also required so that you can retain this data when you upgrade your software.

A simple view of the BIG-IQ® system architecture illustrates the relationship between the components of the system. 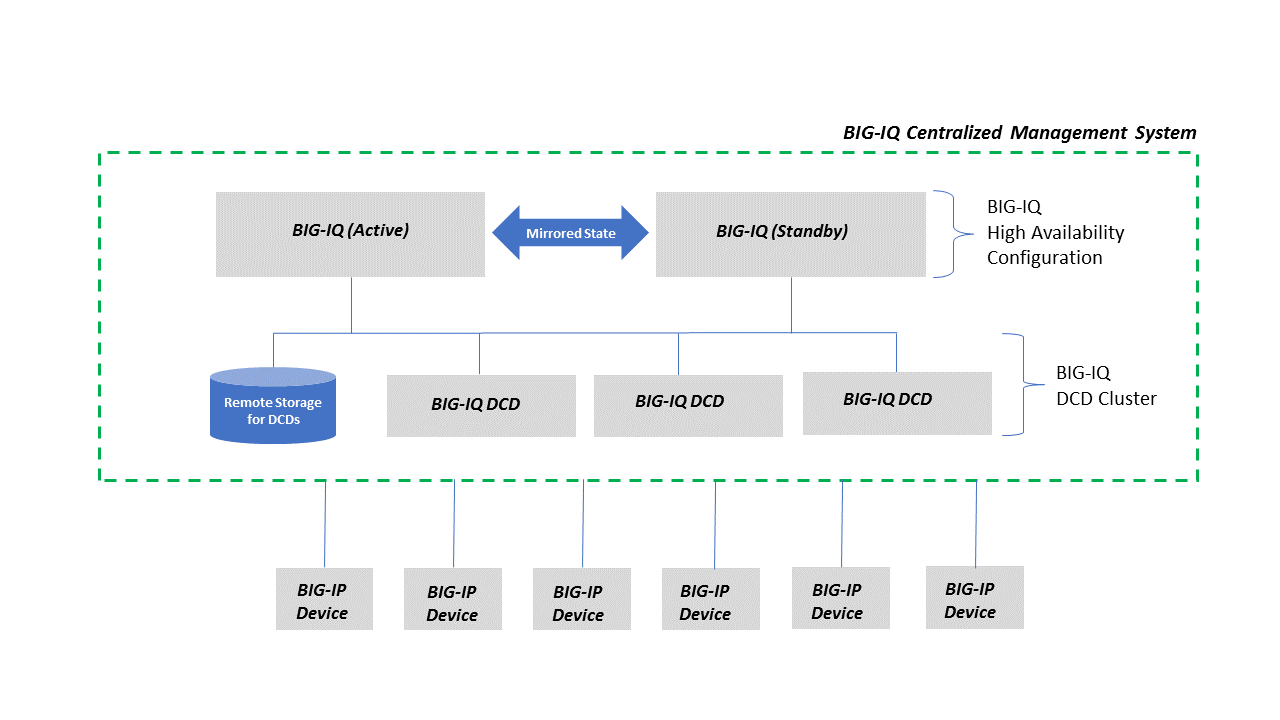 Adding the BIG-IP device to the list of managed devices

The first task in managing a BIG-IP device is to add it to the list of devices managed by the BIG-IQ® Centralized Management system using the Devices screens. Largely, this is making sure that the BIG-IQ system can access the BIG-IP® device at the specified IP address and ports. This is sometimes referred to as establishing trust with the BIG-IP device.

After this task is complete, all of the BIG-IQ Device functionality (inventory reporting, backup and restore, script management, licensing, password management, software upgrade, and so on) is available for the discovered device. If at least one Data Collection Device (DCD) is deployed in the environment, statistics data for device, LTM®, and DNS objects can also be collected and reported.

In environments that only require centralized device management, this task might be the only one you need to perform. The remaining tasks are for those environments that want to manage service configurations, such as Network Security, as well as the devices.

Adding the BIG-IP device and establishing trust with it involves several tasks:

Discovering the configurations on the BIG-IP device

Once the BIG-IP® device has been added to the list of managed devices, you can optionally discover and import the service configurations on the BIG-IP device, such as Local Traffic, Web Application Security, and so on. In general, you want to manage all the service configurations you discover. You always need to discover and import the Local Traffic service first, since the other services depend upon it.

You use the Devices screens to discover configurations.

After discovering the service configurations, you need to import each of them from the BIG-IP® device to the BIG-IQ® Centralized Management system. You need to do this for each service to be managed, using the screen at Devices > BIG-IP DEVICES , then selecting a device and clicking SERVICES.

You can create a snapshot of your BIG-IQ service configuration before you perform the import. The snapshot can be used in case you want to roll back from the configuration you are about to import from the BIG-IP device.

In either case, the object is not changed on any managed BIG-IP devices until you deploy the configuration from the BIG-IQ system to the BIG-IP devices later in the process.

The BIG-IQ system uses the following terms to describe differences and configuration types:

When reviewing the configurations:

Changes you make to the configuration on the BIG-IQ system are not immediately deployed to the BIG-IP devices, but are staged as part of the BIG-IQ working configuration. The exception to this staging, is in the Local Traffic service, where you can use the Change Now setting to more quickly enable or disable virtual servers or pool members, when needed.

This is a summary of what happens during the evaluation process.

Keep the following considerations in mind when performing evaluations:

When you have successfully evaluated your configurations, you can then deploy them to the BIG-IP® devices. You can schedule the deployment to occur at a later time, when your systems are not busy, and the deployment can be performed by another user with the appropriate deployment role if necessary. You might even want to have someone else review the configuration before it is deployed, to avoid issues.

The BIG-IQ system deploys all configuration changes to the BIG-IP device using the REST API. Once the deployment is complete, you can review the deployment job to see what changes were deployed. An object-by-object difference view in JSON format is available as well.

You should consider these facts when managing your BIG-IP® devices using BIG-IQ® Centralized Management.

Overview of other common BIG-IQ tasks and concepts

You use the essential BIG-IQ® Centralized Management features when you add a BIG-IP® device to the BIG-IQ system, and manage the service configurations on that BIG-IP device.

There are other features and concepts that you will commonly use managing your configurations, such as:

Re-discovering or re-importing configurations when needed

Typically, once configurations are imported, there is no need to re-import or re-discover a BIG-IP device. However, you might need to do so in the following cases:

You can review audit log entries and search the audit log entries for changes using the system interface. Changes are shown as highlighted differences between JSON files. You use the screens at Monitoring > AUDIT LOGS to view audit logs for each of the services, such as Network Security or Local Traffic and Network. The Monitoring screens contain many other useful tools for understanding what is occurring on your BIG-IQ system.

How do shared objects impact my deployments?

BIG-IQ® can manage multiple devices simultaneously. These devices can be located in several data centers that may be located in many different locations. To help you easily manage required configuration changes to DNS, NTP, SMTP, and Syslog for a large number of devices, you can use configuration templates.

To start, you create a configuration template, then deploy that template to certain devices. This can save a significant amount of time because you are not required to log in to each device individually to make configuration changes.