How does a data collection device cluster deal with disaster recovery scenarios?

The BIG-IQ system uses high availability and zone awareness functions to maintain data collection device (DCD) operations even when a node or an entire data center goes down. DCDs in each data center are assigned to the appropriate zone. This zone awareness enables the system to manage the distribution of your data and maintain DCD operation in all but the most severe outages.

For a better understanding of how this process works, consider the following example. A hypothetical company named Acme has two data centers; one in Seattle and the other in Boston. Acme wants to ensure data reliability, and has set up these data centers so that if one goes offline, the DCD data it was receiving is routed to the other data center. To achieve this, Acme has an HA pair of BIG-IQ systems for viewing and managing the data, and six DCDs divided equally between the two data centers. Two BIG-IP devices are used to load balance data and configure Fraud Protection Services and Application Security Manager settings for both data centers.

The HA pair ensures that one BIG-IQ system is always available for managing configuration data. The standby system is available for viewing configuration data, and managing data. The DCDs are treated as one large cluster that is split between two sites. Each data node is replicated, so that if one goes down, or even if an entire data center goes down, the data is still available.

Important: The total number of DCDs should be an even number so that they can be split evenly between the data centers. This conformation makes it easier to configure zones.
Note: For optimum performance, F5 recommends that the latency in the connection between any two objects in a DCD cluster be no more than 75 ms. 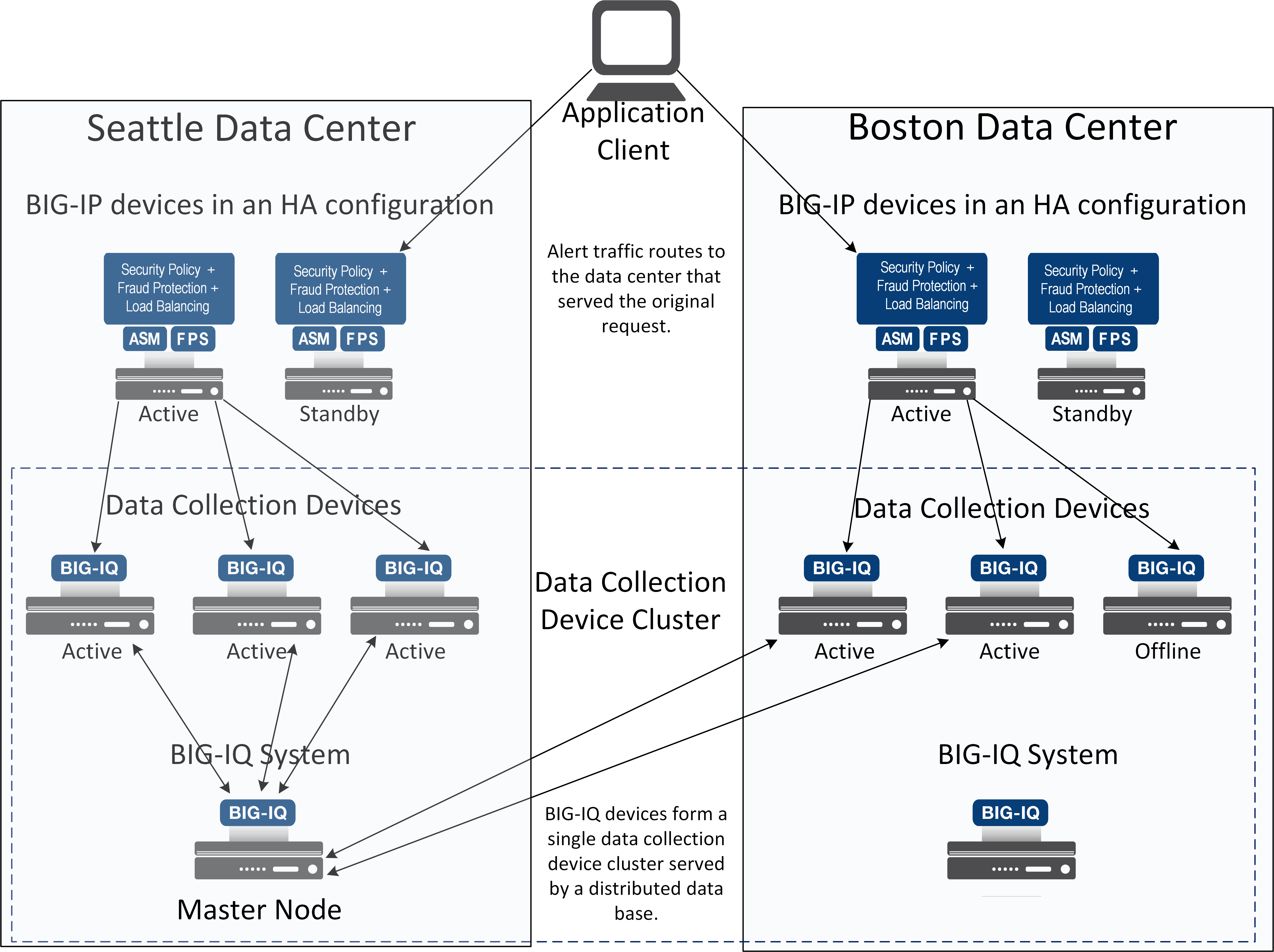 How does the minimum master eligible devices setting work?

One parameter of special significance in determining the behavior of the data collection device (DCD) cluster is the minimum master eligible devices (MMED) setting. All of the devices in the cluster (including the primary and secondary BIG-IQ systems) are eligible to be the master device.

When a device is added or removed from the DCD cluster, the system performs a calculation to determine the optimum default value. You can override the default value to suit your requirements.

This setting determines how many DCDs in the cluster must be online for the cluster to continue to process alert data. If your goal is to keep operating regardless of device failures, it might seem like the obvious choice would be to set this number to as low a value as possible. However, you should keep in mind a few factors:

How is alert data handled when data collection devices fail?

Here are some of the most common failure scenarios that can occur to a data collection device cluster, and how the cluster responds to that scenario.

How is data handled when communication between the two data centers fails?

This scenario is a little more complex than the case where data collection devices fail, so it needs a little more discussion to understand. However, it's also much less likely to occur. The cluster behavior in this scenario is controlled by the Minimum Master Eligible Devices (MMED) setting. The default MMED setting is determined by a simple formula: the (total number of nodes / 2) + 1. This setting should handle most scenarios. Before you consider changing the default setting, you should learn more about how the Elasticsearch logic uses it. Refer to the article on discovery.zen.minimum_master_nodes in the Elasticsearch Reference, version 6.3 documentation. 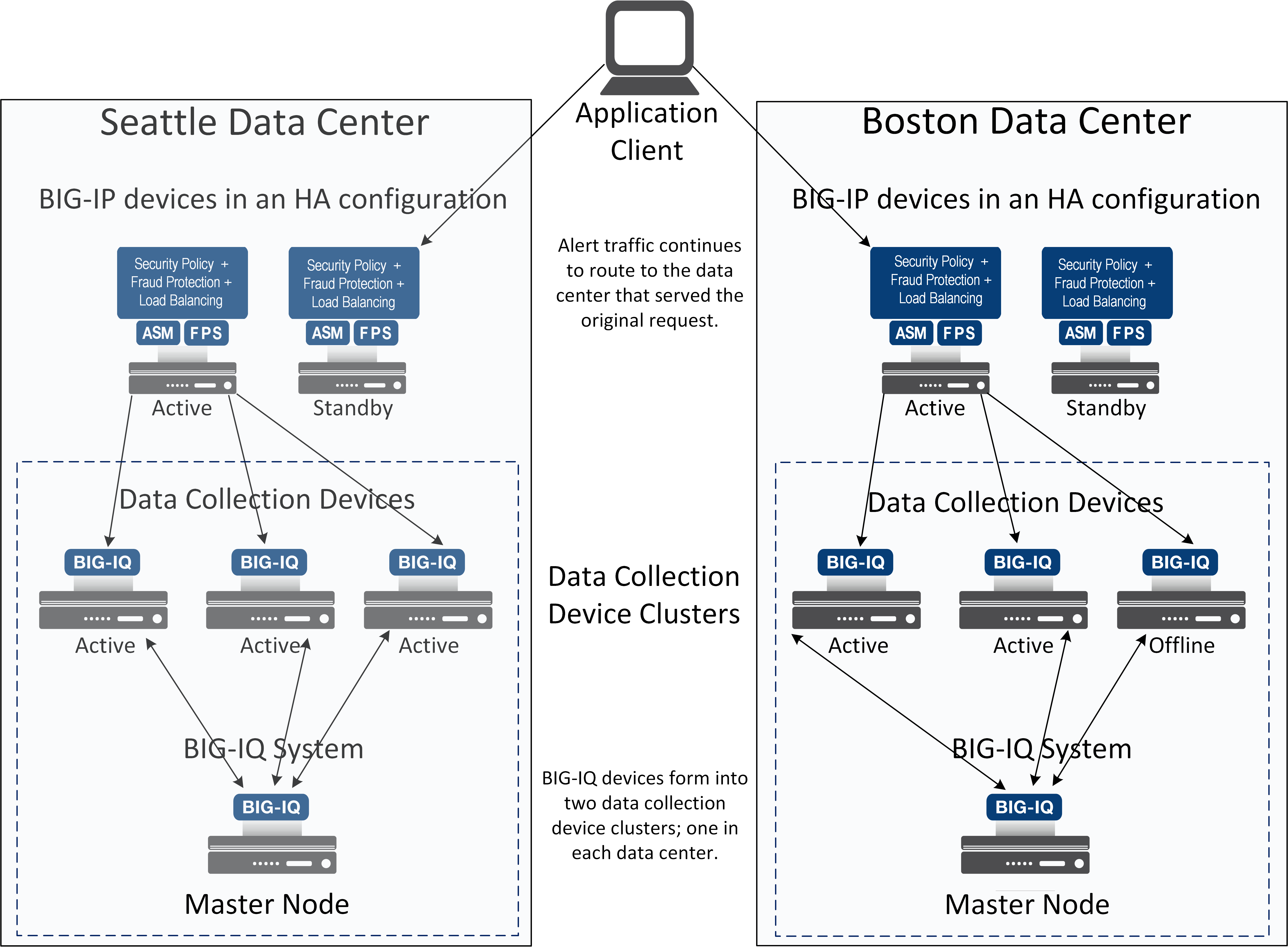 When communication resumes, the cluster that existed before the failure does not reform on its own, because both data centers have formed their own independent clusters. To reform the original cluster, you can restart the master node for one of the clusters. However, reforming the cluster without first doing a couple of precautionary steps is not generally the best practice because you will lose some data.

What happens to your data if you just reform the cluster

How to preserve the maximum amount of data

To preserve as much data as possible, F5 recommends that, instead of just reforming the original cluster by restarting one of the clusters, you perform these two precautionary steps.

After you perform these two steps, all alerts are sent to nodes in the zone that contained the original master node. Then when communication is restored, the DCDs in the zone where the master node was restarted (Boston in our example) rejoin the cluster. The resulting data sync overwrites the Boston data with the Seattle data. The Seattle data center has the data that was collected before, during, and after the communications failure. The result is that all of the data for the original cluster is saved and when the data is synced, all alert data is preserved.

How do I optimize my deployment for disaster recovery?

You can manage the minimum number of devices that must be available for the cluster to be considered operational. If the number of available devices is less than the value specified for the Minimum Master Eligible Devices, the cluster is deemed unhealthy.

Performing routine maintenance on a node

Before you do routine maintenance on a data collection device (DCD), there are a couple of steps you should perform to make sure the DCD cluster operation is not impacted.

Changing the zone for a data collection device

If you decide to change the zone for a data collection device (DCD), you should perform a couple of extra steps to make sure that the cluster recognizes the change.
Table of Contents | << Previous Chapter | Next Chapter >>