Overview: Integrating GTM with other BIG-IP systems on a network

You can add BIG-IP® Global Traffic Manager™ (GTM™) systems to a network in which BIG-IP® Local Traffic Manager™ (LTM®) systems and BIG-IP Link Controller™ systems are already present. This expands your load balancing and traffic management capabilities beyond the local area network. For this implementation to be successful, you must authorize communications between the systems.

The gtmd agent on BIG-IP® Global Traffic Manager™ (GTM™) uses the iQuery® protocol to communicate with the local big3d agent, and the big3d agents installed on other BIG-IP systems. The gtmd agent monitors both the availability of the BIG-IP systems, and the integrity of the network paths between the systems that host a domain and the local DNS servers that attempt to connect to that domain. 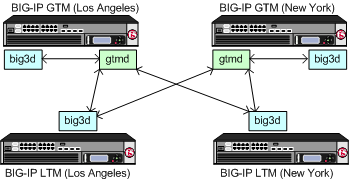 To authorize communications between BIG-IP® systems, perform the following tasks on the BIG-IP GTM™ system that you are adding to the network.

On BIG-IP®GTM™, create a data center to contain the servers that reside on a subnet of your network.
Now you can create server objects and assign them to this data center.
Repeat these steps to create additional data centers.

Ensure that at least one data center exists in the configuration before you start creating a server.
On BIG-IP® GTM™, create a server object to represent the GTM system itself.

On GTM™, define servers that represent the LTM® systems in your network.

Determine the self IP addresses of the BIG-IP® systems that you want to upgrade with the latest big3d agent. Ensure that port 22 is open on these systems.
Run the big3d_install script on the GTM™ system you are adding to your network. This upgrades the big3d agents on the other BIG-IP systems on your network. It also instructs these systems to authenticate with the other BIG-IP systems through the exchange of SSL certificates. For additional information about running the script, see SOL1332 on AskF5.com (www.askf5.com).
Note: You must perform this task from the command-line interface.
Important: All target BIG-IP systems must be running the same or an older version of BIG-IP software.
The SSL certificates are exchanged, authorizing communications between the systems. The big3d agent on each system is upgraded to the same version as is installed on the GTM system from which you ran the script.

You now have an implementation in which the BIG-IP® systems can communicate with each other. GTM™ can now use the other BIG-IP systems when load balancing DNS queries, and can acquire statistics and status information for the virtual servers these systems manage.