My Support
Manual Chapter : Overview Configuring the BIG-IP system as a Layer 2 device with wildcard VLANs

To deploy a BIG-IP® system without making changes to other devices on your network, you can configure the system to operate strictly at Layer 2. By deploying a virtual wire configuration, you transparently add the device to the network without having to create self IP addresses or change the configuration of other network devices that the BIG-IP device is connected to.

A virtual wire logically connects two interfaces or trunks, in any combination, to each other, enabling the BIG-IP system to forward traffic from one interface to the other, in either direction. This type of configuration is typically used for security monitoring, where the BIG-IP system inspects ingress packets without modifying them in any way.

Important: The virtual wire feature is not available on systems provisioned for Virtual Clustered Multiprocessing (vCMP).

This illustration shows a virtual wire configuration on the BIG-IP system. In this configuration, a VLAN group contains two VLANs tagged with VLAN ID 4096. Each VLAN is associated with a trunk, allowing the VLAN to accept all traffic for forwarding to the other trunk. Directly connected to a Layer 2 or 3 networking device, each interface or trunk of the virtual wire is attached to a wildcard VLAN, which accepts all ingress traffic. On receiving a packet, an interface of a virtual wire trunk forwards the frame to the other trunk and then to another network device. 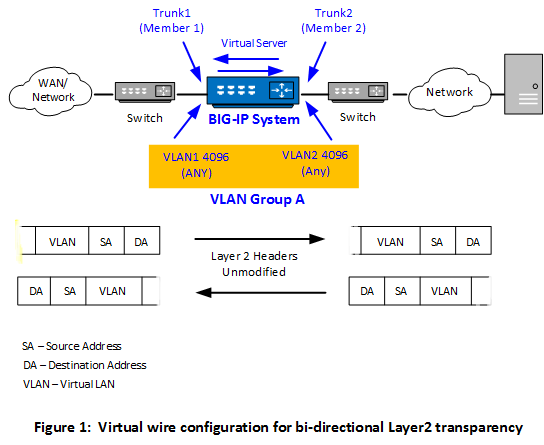 Optionally, you can create a forwarding virtual server that applies a security policy to ingress traffic before forwarding the traffic to the other trunk.

There are a few key points to remember about virtual wire configurations in general:

Note: VLAN double tagging is not supported in a virtual wire configuration.

To alleviate this, F5 recommends that you take one of the following actions: