For outbound connections, SNATs ensure that the internal IP address of the server node remains hidden to an external host when the server initiates a connection to that host.

If you want the system to choose a SNAT translation address for you, you can select the Auto Map feature. If you prefer to define your own address, you can create a SNAT pool and assign it to the virtual server.

Comparison of NATs and SNATs

A SNAT is similar to a NAT, except for some key differences listed in this table.

However, there are atypical network configurations in which the standard BIG-IP system address translation sequence by itself does not ensure that server responses use the required return path. Examples of these atypical configurations are:

Note: Using a SNAT for inbound connections can impact the availability of ephemeral ports. This can lead to the SNAT being unable to process additional connections until some source ports become available.

This image shows a typical problem for client-initiated connections when Local Traffic Manager is not defined as the server’s default gateway, and you have not configured a SNAT for inbound traffic. 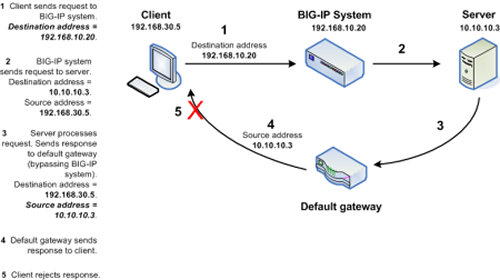 The figure below shows that by configuring a SNAT, you ensure that the response returns through the BIG-IP system instead of through the default gateway, thus ensuring that the client can accept the server response. 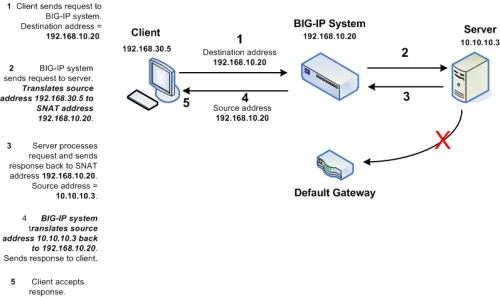 When an internal server initiates a connection to an external host, a SNAT can translate the private, source IP addresses of one or more servers within the outgoing connection to a single, publicly-routable address. The external destination host can then use this public address as a destination address when sending the response. In this way, the private class IP addresses of the internal nodes remain hidden from the external host.

More specifically, a SNAT for an outgoing connection works in the following way:

When you create a SNAT, you map an original IP address to a translation address in one of several ways, depending on your needs:

The types of SNATs you can create are:

You can specify one or more VLANs to which you want the SNAT to apply.